This tutorial is about how to set up a simple 2D mechanism and attach 3D objects, mainly with the tools from the external

This tutorial does not use the skeleton sketch principle (see Assembly3 Create-Skeleton-Sketch on GitHub).

Instead we will use

PartDesign Bodies containing only one

Sketch each, to build a 2D mechanism, a multi sketch skeleton.

The dimensions, and the colours as well, are taken from the SolveSpace tutorial which is referred to on the Assembly3 GitHub page (see above).

The bodies, and their sketches, that are used in this assembly: 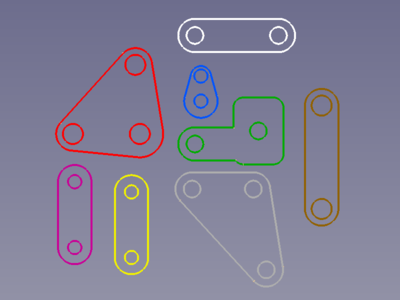 The shape can deviate from that of the real part, but the position of the joint defining geometry must be accurate.

Assembly object. It adds an assembly branch to the Tree view.

Repeat above action to create an Assembly object for each Body and drag the Body into its Parts container. Then fix the Body to its Assembly:

In the Tree view drag all sub-assembly branches into the Parts container of the parent Assembly object. 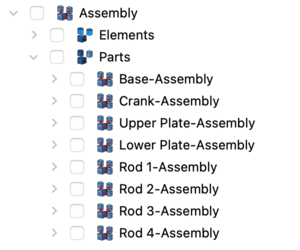 Assembly branch in the Tree view

Now they are ready to be arranged.

First we need a fixed part. To fix the Base completely we would usually select a face, but in this case a circle will do as well. 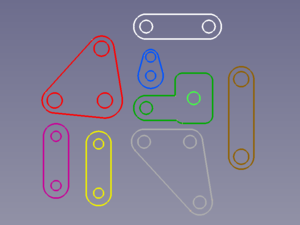 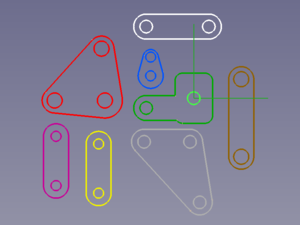 Plane Coincidence constraint. It not only sets both Element's XY planes coplanar, but sets their Z axes colinear, too. 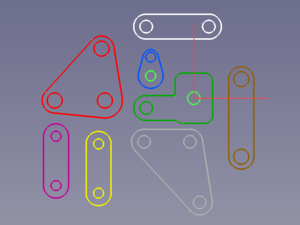 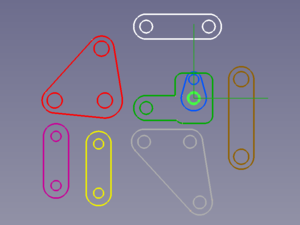 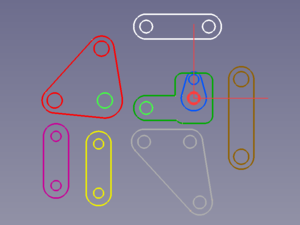 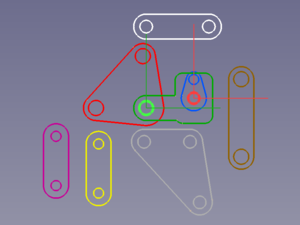 Previously created joints can be identified by their constraint representations (red). 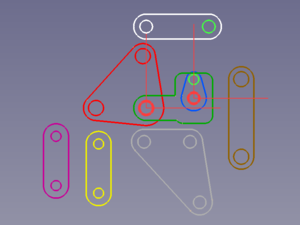 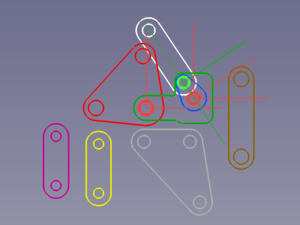 Point on line constraint is all we need. 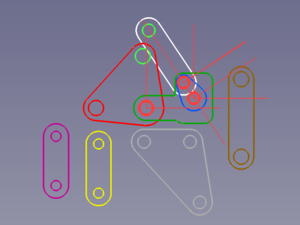 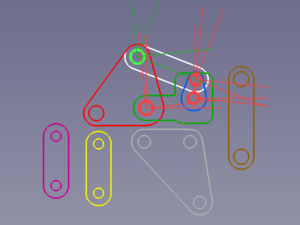 If the Z axes of three elements or joints are parallel and lie on the same virtual plane, the solver may fail to rearrange them in a following step because it is unable to decide in which direction the middle joint should be rotated. This can occur for the Rod 1 element, the Crank - Rod 1 joint, and the Base - Crank joint we have here. If this happens we need to help the solver and rotate one object (e.g. the Crank) manually using the

Another kinematic (sub-)chain starts with 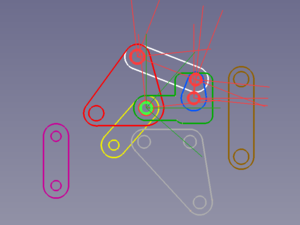 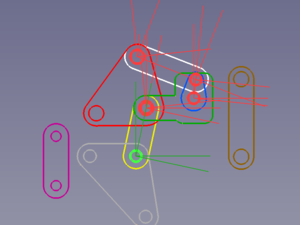 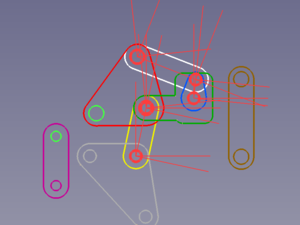 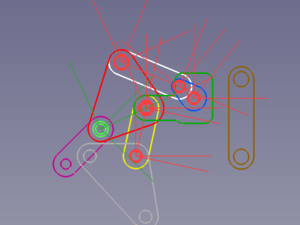 And this kinematic (sub-)chain ends with a

Point on line constraint, too. 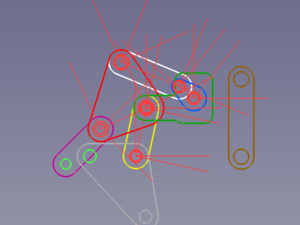 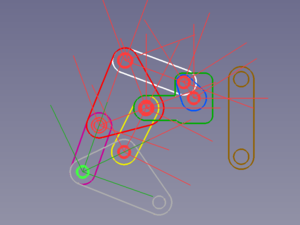 Plane Coincidence constraint on one end and a

Point on line constraint on the other. 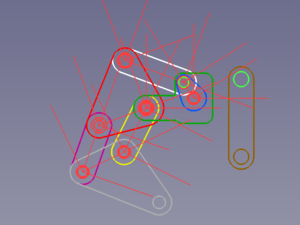 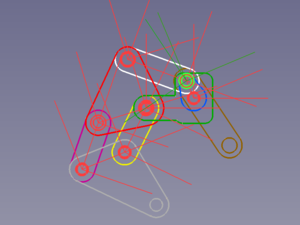 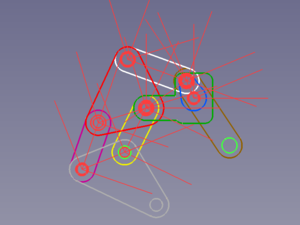 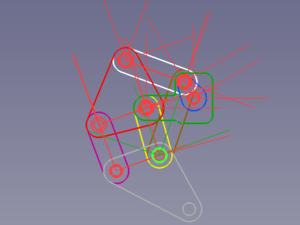 Since Assembly3 doesn't provide any means to control kinematic assemblies, we need external assistance such as this kinematic controller. To use this controller we need to mark one constraint's label with the suffix "Driver" to make it a driving constraint. It may be separated by a "." or "-" for clarity, as the controller will only check if the label ends with "Driver".

We therefore change the label of the Base-Crank joint to Base-Crank.Driver.

The finished kinematic assembly with deactivated representation of Elements and Constraints should look like this: 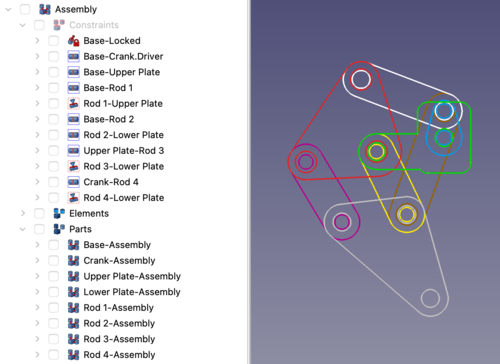 Finished assembly in the Tree view and the 3D view

GIF animation made from an image sequence from this kinematic controller

My expectations about attaching a new object to a base object belonging to a kinematic assembly were something like:

But that would have been too easy.

Assembly3 ConstraintAttachment tool, like any Assembly3 constraint tool, relies on the use of Element objects and their element coordinate systems (ECSs) for positioning tasks.

And so attaching objects is just another way of adding objects to a (sub-)assembly.

The objects have a different orientation and the 3D object should have an offset from the 2D object. 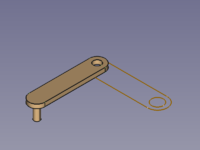 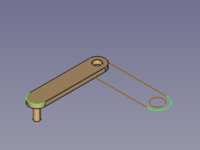 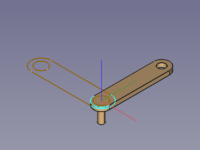 It is now plain to see that the

Assembly3 ConstraintAttachment tool ignores the offset and orientation between both objects.

However the position is already defined as we wanted and so we only need to adapt the angle manually and define the desired offset:

In case we set the properties of the second Element, the movement of angle and offset would go in the opposite direction. 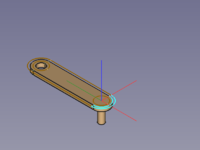 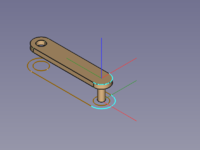 If there is a 3D object attached to each 2D object, it could look like this:

The section Attaching 3D geometry just scratches the surface of extending a sub-assembly, and other constraints or combinations of constraints may be more suitable than the attachment constraint.

It is important to move such a kinematic assembly in tiny steps or the solver will give up and fail. It is almost impossible to use

Axial move for this task.

Assembly3_ConstraintCoincidence constraint is used to drive the kinematic assembly, its property DataAngle (enabled by the property DataLock Angle) accepts positive or negative floating point numbers greater than 360 and so could do several full turns.