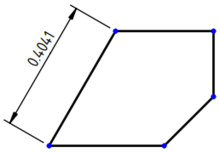 Length dimension taken from two arbitrary nodes of the view

To change the properties of a dimension object either double-clicking it in the drawing or in the Tree view. This will open the dimension dialog:

false - a common dimension by default, possibly with tolerances.
true - a theoretical value. As such, it shall not bear any tolerances. The dimension will be displayed by a frame around the value:

true - the negated value of the DataOver Tolerance is used as DataUnder Tolerance. The display will be

false - the DataUnder Tolerance is taken into account. The display will be 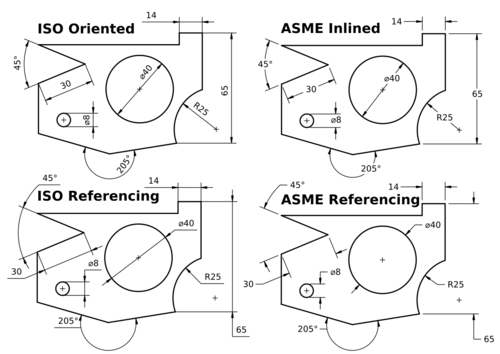 Differences between the supported standards

ISO Oriented - drawn according to the standard ISO 129-1, text is rotated to be parallel with the dimension line tangent.
ISO Referencing - drawn in compliance with ISO 129-1, text is always horizontal, above the shortest possible reference line.
ASME Inlined - drawn according to the standard ASME Y14.5M, text is horizontal, inserted in a break within the dimension line or arc.
ASME Referencing - drawn in compliance with ASME Y14.5M, text is horizontal, short reference line is attached to one side's vertical center.

false - Let the direction of arrows to be selected automatically according to the rule above.
true - Override the automatically chosen direction and force the opposite one.

Dimension objects are vulnerable to the "topological naming problem". This means that if you modify the 3D geometry the faces and edges of the model may be renamed internally; if a dimension is attached to an edge that is then modified, the dimension may break. In general, it is not possible to keep the projected 2D dimensions synchronized with the actual 3D objects.

Therefore, it is recommended that dimensions be added when the 3D model is no longer being modified.

If you want to keep a TechDraw view with dimensions that won't break, you need to dimension an object that won't change.

See Landmark Dimensions for another approach to circumventing the topological naming issue.

The Length Dimension tool can be used in macros and from the Python console by using the following functions: