The main purpose of a technical drawing is that others understand what the designer created with what tolerances AND how to manufacture the design. Since most parts have to fit to assemblies, also the geometric relations to other parts are important. To achieve this, the system of Geometric Dimensioning and Tolerancing (GD&T) was developed.

Take for example this part: 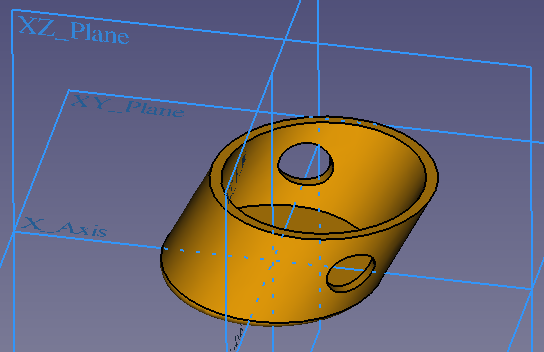 In the application an axis should be put through the 2 holes of the part. That mean we have to specify the following things

The straightness is important because a bent axis would not fit through the holes. The hole alignment is important because just drilling each hole at the given position without taking care of the axis, would lead to holes through which the axis will not fit. So just specifying the hole dimension and position is not sufficient. The first point is "classical" dimensioning while the 2 others are geometric information, thus GD&T comes into play. The example also makes clear that GD&T is essential to assure that parts fit well to assemblies.

If you are not familiar with the concept of GD&T, we highly recommend to learn about it now. For example a quick introduction is given in this video. For more like the concept of the "maximum material condition", have a look at this video. For details to all sorts of GD&T features, look around in the Internet. For example this YouTube channel provides some good explanations.

TechDraws' capabilities to fulfill the common GD&T standards is limited (as of FreeCAD 0.19) but you can achieve already many things. This Wiki page explains what is implemented and what tricks can be used for non-implemented features. Note: this Wiki page is not about to teach GD&T!

TechDraw provides several tools to create different types of dimension. Please have a look at the different dimensions on how to create and modify them.

The default font for new dimension is determined by the preferences setting Label Font. The default font size is specified by the preferences setting Font Size.
Note: It is recommended to use a font in which the minus sign has the same width as the plus sign because this assured that tolerances will be formatted as proposed by the GD&T norms. Such a font is for example osifont that is part of all FreeCAD installations.

The default format for new dimension numbers depends on the preferences options Use Global Decimals and Alternate Decimals. This specifies the number of decimals, but in every case the dimension is a floating point number. For example if the setting is to have 2 decimals, the used format specifier is "%.2f" (floating point number with 2 decimals).

The number format can be changed:

The syntax of the format specifier is explained here. You can also use this online tool to see what formatting specifier will format numbers.

With the property DataInverted you can make length dimensions negative and flip angles from the range 0 - 180° to the the reflex range 180° - 360°.

You can use your own text instead of a formatted number by setting the option Arbitrary Text in the dimension dialog. Then the content of the field Format Specifier will be printed as dimension.

To get rid of a tolerance, change Overtolerance and Undertolerance to each zero.

The default number format for new tolerances is by default the same format than for the dimension. It can be changed in the dimension dialog.

You can also use your own text instead of a formatted number by checking the option Arbitrary Tolerance Text in the dimension dialog. Then the content of Tolerance Format Specifier will be used as tolerance text.

Tolerances are created by using the Balloon feature of TechDraw. Since for most features a frame is required, it is helpful to change in the TechDraw preferences the Balloon Shape to Rectangle. 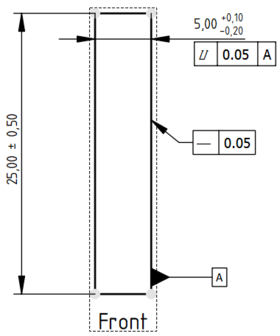 Example of a toleranced rod. (The run-out already defines the straightness, it is only there as example.)

The tolerance indicator of GD&T is a frame, also called "feature control frame". It can be created by using the Balloon feature of TechDraw:

There is no rule that defines if or how the tolerance indicator must have a leader line or not, so you can either:

The example at the right side shows the two possible tolerance indicator layouts.

Datums in the GD&T sense of the meaning are surfaces your tolerance is relative to. They are created as Balloon:

Example of a datum in a drawing

As reference, here are lists of characters to be used for geometric tolerancing: