Std Part (internally called App Part) is a general purpose container that keeps together a group of objects so that they can be moved together as a unit in the 3D view.

The Std Part element was developed to be the basic building block to create mechanical assemblies. In particular, it is meant to arrange objects that have a Part TopoShape, like Part Primitives, PartDesign Bodies, and other Part Features. The Std Part provides an Origin object with local X, Y, and Z axes, and standard planes, that can be used as reference to position the contained objects. In addition, Std Parts may be nested inside other Std Parts to create a big assembly from smaller sub-assemblies.

Although it is primarily intended for solid bodies, the Std Part can be used to manage any object that has a Placement property, so it can also contain Mesh Features, sketches, and other objects derived from the App GeoFeature class.

Do not confuse the

Std Part. The first one is a specific object used in the

PartDesign Workbench, intended to model a single contiguous solid by means of PartDesign Features. On the other hand, the Std Part is not used for modelling, just to arrange different objects in space, with the intention to create assemblies.

Std Part tool is not defined by a particular workbench, but by the base system, thus it is found in the structure toolbar that is available in all workbenches. To group objects arbitrarily without considering their position, use

Std Group; this object does not affect the placements of the elements that it contains, it is essentially just a folder that is used to keep the Tree view organized. 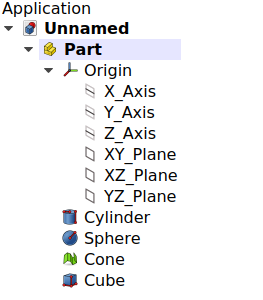 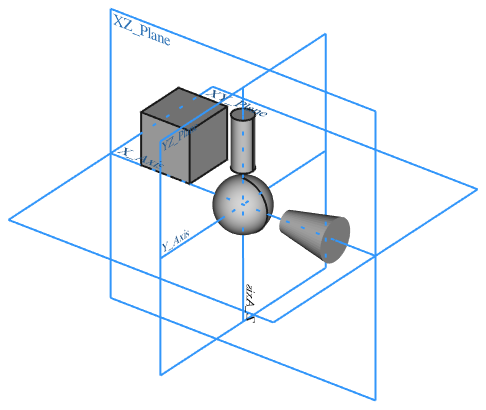 Left: elements inside a Std Part in the Tree view. Right: objects positioned in space, referred to the Origin of the Std Part.

The Std Part, internally called App Part (App::Part class), is derived from the App GeoFeature (App::GeoFeature class) and inherits all its properties. It also has several additional properties. Notably properties that help it manage information in the context of an assembly, for example, DataType, DataId, DataLicense, DataLicenseURL and DataGroup.

An open document can contain multiple Parts. But only one Part can be active. The active Part is displayed in the tree view with the background color specified by the Active container value in the preferences editor (by default, light blue). It will also be shown with bold text.

To activate or de-activate a Part: 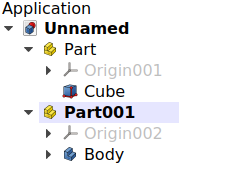 Document with two Std Parts, of which the second one is active.

The Origin consists of the three standard axes (X, Y, Z) and three standard planes (XY, XZ and YZ). Sketches and other objects can be attached to these elements when creating them. 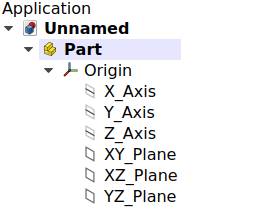 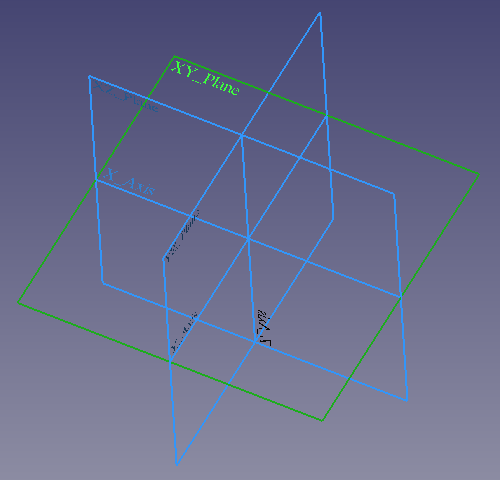 Left: Part Origin in the Tree view. Right: representation of the Origin elements in the 3D view.

Note: the Origin is an App Origin object (App::Origin class), while the axes and planes are objects of type App::Line and App::Plane respectively. Each of these elements can be hidden and unhidden individually with the Space bar; this is useful to choose the correct reference when creating other objects.

Note 2: all elements inside the Part are referenced to the Part's Origin which means that the Part can be moved and rotated in reference to the global coordinate system without affecting the placement of the elements inside. 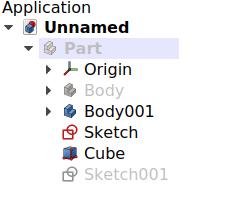 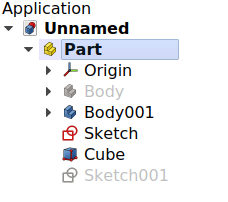 See Part Feature for the general information on adding objects to the document.

You cannot create a scripted App::Part. However, you can add App::Part behavior to a scripted Part::FeaturePython object by using the following code: