Previous: Macros
Next: Introduction to Python

With Scripting we mean create topological objects using FreeCAD's Python interpreter. FreeCAD could be used a "very good" replacement of OpenSCAD, mainly because it has a real Python interpreter, that means that it has a real programming language on board, almost everything you could do with the GUI, is doable with a Python Script.

Sadly information about scripting in the documentation, and even in this wiki are scattered around and lacks of "writing" uniformity and most of them are explained in a too technical manner.

The first obstacle in an easy way to scripting is that there is no direct way to access the FreeCAD internal Python editor through a menu item or a icon on the toolbar area, but knowing that FreeCAD opens a file with a .py extension in the internal Python editor, the most simple trick is create in your favorite text editor and then open it with the usual command File → Open.

To make the things in a polite way, the file has to be written with some order, FreeCAD Python editor have a good "Syntax HIghlighting" that lacks in many simple editors like Windows Notepad or some basic Linux editors, so it is sufficient to write these few lines:

Save them with a meaningfull name with .py extension and load the resulting file in FreeCAD, with the said File - Open command.

A minimal example of what is necessary to have in a script is shown in this portion of code that you could be use as a template for almost any future script:

Some tricks are incorporated in the above code:

Let's start with a small script that does a very small job, but display the power of this approach.

You will see some magic things, a new document is open named "Pippo" (Italian name of Goofy) and you will see in the 3d view a Cube, like the one in the image below. 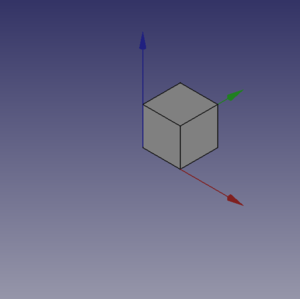 Not too amazing? Yes, but we have to start somewhere, we can do the same thing with a Cylinder, add these lines of code after the cubo() method and before the line: # objects definition.

Even here nothing too exciting. But please note some peculiarities:

Now what to do with this geometries?

Let's introduce boolean operations. As a starter example put these lines after base_cyl(..., this create a method for a Fusion also know as Union operation:

Nothing exceptional also here, note however the uniformity in method coding; This approach is more linear that those seen around other tutorial on scripting, this "linearity" help greatly in readability and also with cut-copy-paste operations.

Let's use the geometries, delete lines below the code section starting with # objects definition, and insert the following lines:

Launch the script with the green arrow and we will see in the 3D view something like: 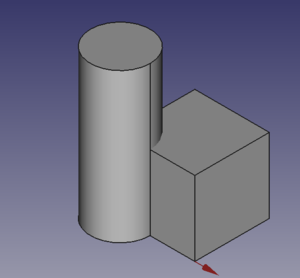 We usually are in need of placing geometries respect each other, when building complex object this is a recurring task, the most common way is to use the geometry Placement property.

FreeCAD offer a wide choice of ways to set this property, one is more tailored to another depending the knowledge and the background of the user, but the more plain writing is explained in the cited Tutorial, it use a peculiar definition of the Rotation portion of Placement, quite easy to learn.

But over other consideration, one thing is crucial, geometry reference point, in other word the point from which the object is modeled by FreeCAD, as described in this table, copied from Placement:

This information has to be kept in mind especially when we have to apply a rotation.

Some examples may help, delete all the line after base_cyl method and insert the portion of code below:

Let's explain something in the code:

It can be easily noted that aeroplano geometry rotate around his "barycenter" or "center of gravity", that I've fixed at wing center, a place that is relatively "natural", but could be placed wherever you want.

The first Vector(0, 0, 0) is the Translation vector, not used here, but if you substitute aeroplano() with these lines:

You will see in the Report window this text:

you can easily visualize the value of pos_ali using a print statement in the aeroplano(... method and see that it is:

This is the meaning of the word "awkward" that I've used to define Placement property.

Previous: Macros
Next: Introduction to Python