The Raytracing workbench is being superseded by the new Render Workbench, which is intended as its replacement. The Render Workbench can be installed through the Addon Manager. The information here is provided because by default FreeCAD is still shipped (as of 0.19-24276) with the Raytracing Workbench, and because the new module should basically work in the same way

This tutorial is meant to introduce the reader to the basic workflow of the Raytracing Workbench, as well as most of the tools that are available to create a rendered image. Note that the Raytracing workbench is progressively being obsoleted in favor of the newer Render Workbench, available via the Addons Manager 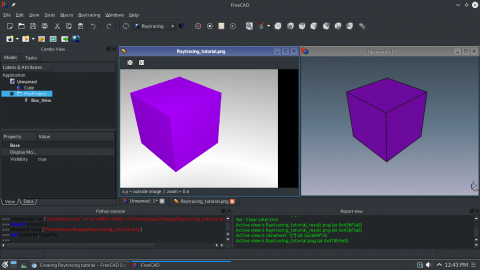 In this example a Cube is used as the study object, but models created in the Part or PartDesign Workbenches can be used instead.

Now we have a model with which to work.

Preparing for the render

FreeCAD will immediately open the image after the render is finished.

We are now finished with the basic workflow for the Raytracing workbench.