OpenSCAD Workbench is intended to offer interoperability with the open source software OpenSCAD. This program is not distributed as part of FreeCAD, but should be installed to make full use of this workbench. OpenSCAD should not be confused with OpenCASCADE, which is the geometrical kernel that FreeCAD uses to build geometry on screen. The OpenCASCADE libraries are always needed to use FreeCAD, while the OpenSCAD executable is entirely optional.

It contains a CSG importer to open the CSG files from OpenSCAD, and an exporter to output a CSG based tree. Geometry which is not based on CSG operations will be exported as a mesh.

This workbench contains functions to modify the CSG feature tree and repair models. It also contains general purpose tools that do not require installation of OpenSCAD; they can be used in conjunction with other workbenches. For example, the Mesh Workbench internally uses the OpenSCAD functions to perform operations with meshes, as they are quite robust. 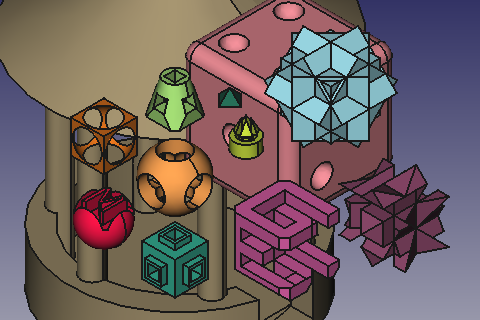 In FreeCAD 0.19, the Ply (Python-Lex-Yacc) module, which is used to import CSG files, was removed from the FreeCAD source code, as it is a third party library not developed by FreeCAD. As a result, you now need to install Ply before using the OpenSCAD Workbench. When using a pre-packaged, stable version of FreeCAD this dependency should be installed automatically in all platforms; in other cases, for example, when compiling from source, you may have to install it from an online repository.

In openSUSE this is done by:

In Debian/Ubuntu based systems this is done like the following:

The general installation in all platforms can be done from the Python package index.

OpenSCAD creates constructive solid geometry, as well as imports mesh files and extrudes 2D geometry from DXF files. FreeCAD allows you to create CSG with primitives as well. The FreeCAD geometry kernel (OCCT) works using a boundary representation. Therefore conversion from CSG to BREP should, in theory, be possible whereas conversion from BREP to CSG is, in general, not.

OpenSCAD works internally on meshes. Some operations which are useful on meshes are not meaningful on a BREP model and can not be fully supported. Among these are convex hull, minkowski sum, glide and subdiv. Currently we run the OpenSCAD binary in order to perform hull and minkwoski operations and import the result. This means that the involved geometry will be triangulated. In OpenSCAD non-uniform scaling is often used, which does not impose any problems when using meshes. In our geometry kernel geometric primitives (lines, circular sections, etc) are converted to BSpline prior to performing such deformations. Those BSplines are known to cause trouble in later boolean operations. An automatic solution is not available at the moment. Please feel free to post to the forum if you encounter such problems. Often such problems can be solved be remodeling small parts. A deformation of a cylinder can substituted by an extrusion of an ellipses.

When importing DXF set the Draft precision to a sensible amount as this will affect the detection of connected edges.

Importing OpenSCAD code with text requires that the font is Installed on your system.

On Windows, the font has to be added to the %WINDIR%/fonts directory - generally C:\Windows\Fonts. Clicking "Install" when viewing the font under Windows is not (always) sufficient for OpenSCAD.

You can check which fonts are "Installed", by opening OpenSCAD as a standalone tool and checking the list in "Help > Font List". You can check the Font Name known by OpenSCAD and the directory where these fonts are located.

After copying your font to the appropriate system directory, close and reopen OpenSCAD and verify that your font appears in the list, and that the name is exactly the one you are using.

Behind the scenes, FreeCAD gets the DXF file corresponding to the text from OpenSCAD.

That makes importing with text slow. FreeCAD and the File Explorer (Windows) can be unresponsive during the import.

At the end of the import you may have several lines with "0" appearing in the console. There are as many 0's as there are contours in your text. The more contours there are, the slower the import.

Therefore it is best to first try the import with a simple test case, using a single letter for your font that lets you confirm it's the correct font (replace NameOfFont with your Font name):

The "use <FONT>;" statements in your source files are not effective when importing in FreeCAD. Under OpenSCAD, the effect of that "use" statement is that the provided font file is temporarily added to the list of known fonts.

OpenSCAD has itself some issues with fonts. For instance, it will interpret use <FONT>; only when it first opens the script, not when modified interactively.

Importing OpenSCAD files with text can have as side effect that some Parts "disappear". That probably indicates that your font is not found as in a few test cases it was shown that adding the font to the system directory made that issue disappear.