Before starting this tutorial, please ensure that you have already performed the first part.

Learn more about the Ship workbench from it's dedicated wiki page: Ship Workbench

In this tutorial we will work with weights and tanks in order to compute GZ curve, the most important hydrostatic stability parameter. GZ is the static moment generated when the ship takes roll angle, of course, since the GZ arm is positive, the ship has a positive moment, and will try to recover upright position, but when GZ turns on negative numbers ship has not anymore stability, reaching a critical situation.

In this tutorial we will set weights and tanks for our series 60 ship, in a simulated situation.

In order to can compute GZ curve we need to know ship weights, and their position at each roll angle, so weights will be divided in two categories:

Weights definition tool can be used to set first category of weights. When you launch the tool for first time (with ship instance selected), the Ship workbench initializes ship weights with Lightweight ship (equal to ship displacement) that is placed on the ship geometry center of gravity X coordinate, and at design draft height. Usually there are at least 2 relevant weights:

So we will change it. Double-click over each cell we can edit the value, setting weights:

Weights position are shown in the 3D view. Note: the annotations will be removed when the tool is closed. When you press Accept weights will be stored in your ship instance.

Tanks must be created on top of solid geometry, as the ship instance, so first step is create two bow tanks (one per ship side) solid geometries that we will consider (usually ships have a lot of tanks for fuel, fresh water, salt water, load, etc).

In order to generate tanks we load Part module, and create a box solid.

We need to edit the box, so we select it at Attributes and tags tree, and change from view to data tab. Expand Placement, and into them Position, and set x to 1.5, and z to -1. We want to change box length too changing it for 5.0 (note that units can be in mm, don't take care about this).

We can perform port side tank selecting our starboard geometry and executing mirror tool, selecting XZ as mirror plane.

In order to convert geometry into a ussual solid shape our tanks, and recover our s60_IowaUniversity geometry, we can load Draft module, and with starboard tank geometry selected execute Upgrade, and repeat with port side tank geometry. We can rename geometries as:

We can delete created Box, that we don't need anymore.

If reload FreeCAD-Ship module another time, we can find tank instances generator tool.

Now we can select StarboardTankGeom and execute tank instance generation tool, where some data must be provided. We will set 40% of filling level, and 925 kg/m

(fuel approach). When Accept is clicked a new tank instance called Tank is generated. We can rename it as StarboardTank, and hide StarboardTankGeom.

We can repeat the same process in order to generate PortTank.

Figure shown our ship result that we will compute.

The Ship workbench provide a tool to easily compute a GZ curve.

With Ship instance selected, we can run the tool. The first thing that we can see at opened dialog is a list with all tank instances found at active document. We want to use both of them, so we click over the tanks that are remarked with a different background.

So we are in a unloaded situation, where draft are sightly lower than design draft. Usually lower drafts imply lower ship stability, the draft depends on loading condition, so if we really expect than ship can be operated in this loading condition we can consider implement ballast tanks.

We can also automatically compute ship trim, operation that can take around one minute, retrieving that our ship have 0.95 degrees of trim angle (positive by stern). In this example we will work without trim angle (0 degrees).

Tool request roll angles considered too. In this case we want to know all ship behaviour, so we can set:

When we press Accept tool starts the computation. If you run FreeCAD from the terminal you can see work progress. In a couple of seconds we will receive GZ curve.

This tool use pyxplot and ghostscript too. You can see where gz.dat output file has been placed at the report view (View/Views/Report view), and load it with datasheet software (for example libreOffice). Nearby data file several auxiliary files has been created too:

This files will be overwritten if you executes the tool another time. 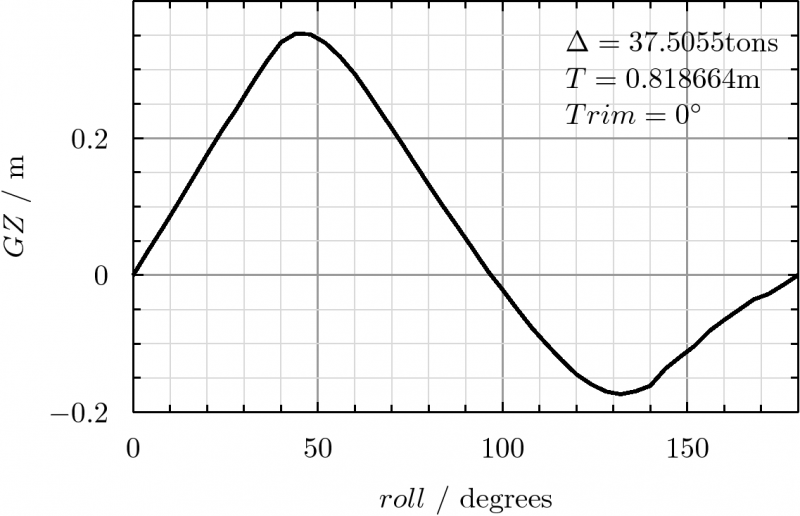 At the other hand, the ship in this bad condition has positive GZ values up to 95 degrees roll angle, but has not been enough for IMO stability requirements, showing the hard criteria imposed about this item.

Of course this example is not real (first for all fuel tanks cannot be placed in the double bottom structure, or using hull side as structure), but is a good example in order to learn to use Ship Workbench.