This page explains the way the

PartDesign Workbench is intended to be used starting with FreeCAD 0.17.

Part Workbench and other workbenches construct models by combining shapes together (see Constructive solid geometry), the

PartDesign workbench uses features. A feature is an operation that modifies the shape of a model.

The first feature is commonly called the base feature. As more features are added to the model, each feature takes the shape of the previous one and adds or removes matter, creating linear dependencies from one feature to the next. In effect, this methodology mimics a common manufacturing process: a block is cut on one side, then on another side, holes are added, then rounds, etc.

All features are listed sequentially in the Model tree and can be edited at any time, with the last feature at the bottom representing the final part.

Features can be sorted into different categories:

Body. The PartDesign Body is a container that groups a sequence of features forming a single contiguous solid. 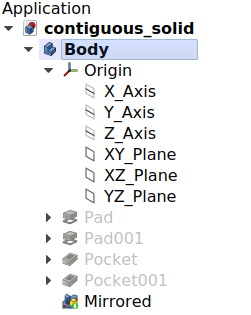 Multiple bodies can be created in a FreeCAD document; they can also be combined to form a single contiguous solid.

Only one body can be active in a document. The active body gets the new created features. A body can be activated or deactivated by double clicking on it. An activated body is highlighted in light blue. The highlighting color can be set in the preferences under Display/Colors/Active container since version 0.18.

When a model requires multiple bodies, like the previous wooden chair example, the general purpose

Part container can be used to group them and move the whole as a unit.

A body will present by default its most recent feature to the outside. This feature is defined by default as the tip. A good analogy is the expression the tip of the iceberg: only the tip is visible above the water, most of the iceberg's mass (the other features) is hidden. As a new feature is added to the body, visibility of the previous feature is turned off, and the new feature becomes the tip.

There can only be one feature visible at a time. It is possible to toggle the visibility of any feature in the body, by selecting it in the Model tree and pressing the Spacebar, in effect going back in the history of the body.

The body has an Origin which consists of reference planes (XY, XZ, YZ) and axes (X, Y, Z) that can be used by sketches and features. Sketches can be attached to Origin planes, and they no longer need to be mapped to planar faces for features based on them to be added or subtracted from the model.

It is possible to temporarily redefine the tip to a feature in the middle of the Body tree to insert new objects (features, sketches or datum geometry). It is also possible to reorder features under a Body, or to move them to a different Body. Select the object and right-click to get a contextual menu that will offer both options. The operation may be prevented if the object has dependencies in the source Body, such as being attached to a face. To move a sketch to another Body, it should not contain links to external geometry.

Difference with other CAD systems

A fundamental difference between FreeCAD and other programs, like Catia, is that FreeCAD doesn't allow you to have many disconnected solids in the same

PartDesign Body. That is, a new feature should always be built on top of the previous one. Or said in a different way, the newer feature should "touch" the previous feature, so that both features are fused together and become a single solid. You cannot have "floating" solids. 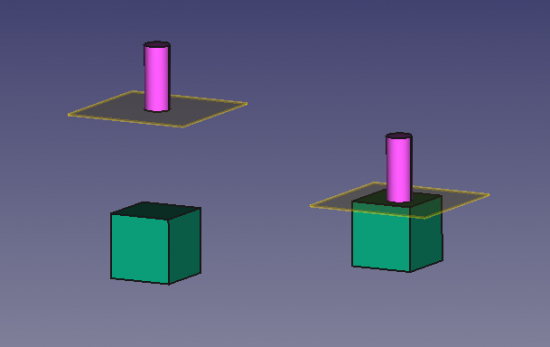 Difference between Catia and FreeCAD. Left: Catia allows disconnected bodies from the previous features of the body. In FreeCAD this causes an error; Right: the newer feature should always contact or intersect the previous feature so that it is fused to it, and becomes a single contiguous solid.

Datum geometry consists of custom planes, lines, points or externally linked shapes. They can be created for use as reference by sketches and features. There is a multitude of attachment possibilities for datum objects.

In some CAD systems you can define a datum plane that is offset from the previous body and you can create a disconnected solid. So, placing a lot of datum planes, and building objects on them is okay and won't cause an error. Typically, you would eventually adjust the planes to their final positions, so that the individual objects are fused together.

In FreeCAD, as mentioned in the previous section, disconnected solids are NOT allowed, so a sketch on a datum plane that would create a non-contiguous solid will fail.

Datum planes also make sense if there will be more than one sketch in the same non-standard orientation. In this case a datum plane can be used and the orientation only needs to be adjusted for the datum plane to adjust all associated sketches and the features created from the sketches.

Both sketches and datum planes should be attached to base planes. Referencing generated geometry (geometry that is the result of a feature creating operation, for example a pad or pocket) should be avoided since faces and edges get renamed and renumbered and the references no longer refer to the same thing. This is called topological instability and is due the way FreeCAD uses some external geometric libraries. Hopefully this will be improved in the future. (See Advice for creating stable models below).

Even if not used for supporting sketches, datum objects are still helpful as visual indicators, to draw attention to important features or distances in the modelling process. (Though, simply adding geometry to a sketch also provides similar visual feedback.) 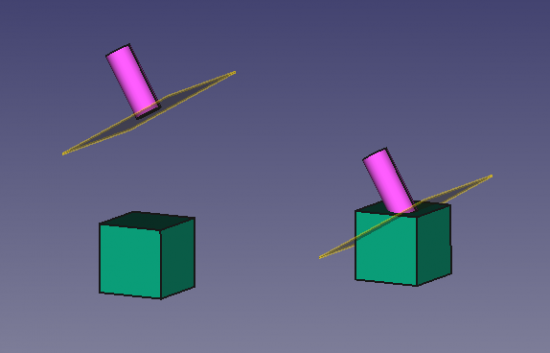 Difference between Catia and FreeCAD. Left: Catia allows disconnected bodies from the previous features of the body. In FreeCAD this causes an error; Right: the newer feature should always contact or intersect the previous feature, so that it is fused to it, and becomes a single contiguous solid. In this example, the new solid is based on a datum plane that is rotated around the Y axis.

It is possible to cross-reference elements from a body in another body via datums. For example the datum shape binder allows to copy over faces from a body as reference in another one. This should make it easy to build a box with fitting cover in two different bodies. FreeCAD helps you to avoid accidentally linking to other bodies by asking for confirmation of your intent.

Object attachment is not a specific PartDesign tool, but rather a Part utility introduced in v0.17 that can be found in the Part menu. It is heavily used in the PartDesign workbench to attach sketches and reference geometry to the standard planes and axes of the Body. Very extensive ways of creating datum points, lines and planes are available. Optional attachment offset parameters make this tool very versatile.

More info can be found in the Attachment page and the Basic Attachment Tutorial.

The idea of parametric modeling implies that you can change the values of certain parameters and subsequent steps are changed according to the new values. However, when severe changes are made, the model can break due to the topological naming problem that is still unresolved in FreeCAD. Breakage can be minimized when you respect the following design principles:

There are several workflows that are possible with the PartDesign Workbench. What should always be noticed is that all the features created inside a PartDesign Body will be fused together to obtain the final object.

Sketches need to be supported by a plane. This plane can be one of the main planes (XY, XZ, or YZ) defined by the Origin of the Body. A sketch is either extruded into a positive solid (additive), with a tool like

PartDesign Pad, or into a negative solid (subtractive), with a tool like

PartDesign Pocket. The first adds volume to the final shape of the body, while the latter cuts volume from the final shape. Any number of sketches and partial solids can be created in this way; the final shape (tip) is the result of fusing these operations together. Naturally, the Body can't consist of only subtractive operations, as the final shape should be a solid with a positive, non-zero volume.

Sketches can be supported by the faces of previous solid operations. This may be necessary if you need to access a face that is only available after a certain feature has been created. However, this workflow isn't recommended since, if the original feature is modified, the following features in the sequence may break. This is the topological naming problem.

Use of datum planes for support

Datum planes are useful to support the sketches. These auxiliary planes should be attached to the base planes of the body.

Note: In many cases, a sketch attached to a base plane with attachment offsets can accomplish the same function. Datums are particularly useful when multiple sketches or other constructs will use the datum. This means all changes to the datum will be apply to attached sketches, etc. Adding a single sketch to a datum, rather than using attachment offsets in the sketch properties, is an extra step and is essentially redundant.

As with sketches, it is possible to attach Datum planes to generated geometry (edges, faces of previously created solids), but this is not recommended since it can cause the topological naming problem.

PartDesign ShapeBinder can be used to import external geometry into the body to serve as reference; then sketches can be attached to this auxiliary body, either using datum planes or not.

Again, the ShapeBinder should be based on Sketches from the previous body, not generated geometry.

Using datum objects is often the best way to produce stable models, when used with base planes and attachment offsets, although it requires a bit more work from the user. For details about basic attachment see: Basic Attachment Tutorial Note: while this tutorial talks about sketches, datum attachment is done in similar fashion.