In this page we will show how to build a simple graphical interface with Qt Designer, Qt's official tool for designing interfaces; the dialog will be converted to Python code, then it will be used inside FreeCAD. We'll assume that the user knows how to edit and run Python generally.

In this example, the entire interface is defined in Python. Although this is possible for small interfaces, for larger interfaces the recommendation is to load the created .ui files directly into the program.

Two general methods to create interfaces, by including the interface in the Python file, or by using .ui files.

In CAD applications, designing a good UI (User Interface) is very important. About everything the user will do will be through some piece of interface: reading dialog boxes, pressing buttons, choosing between icons, etc. So it is very important to think carefully to what you want to do, how you want the user to behave, and how will be the workflow of your action.

There are a couple of concepts to know when designing interface:

So, now that we have well defined what we will do, it's time to open the qt designer. Let's design a very simple dialog, like this: 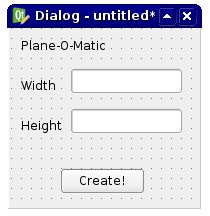 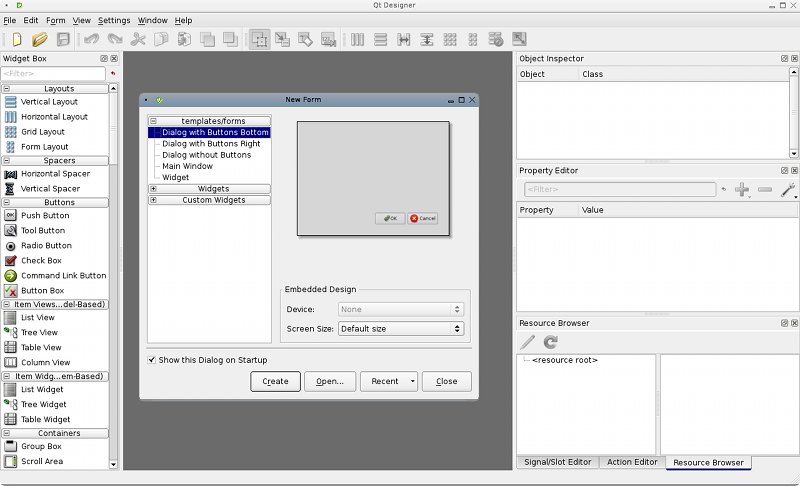 Qt Designer is very simple to use. On the left bar you have elements that can be dragged on your widget. On the right side you have properties panels displaying all kinds of editable properties of selected elements. So, begin with creating a new widget.

Note: that we chose very simple controls here. Qt has many more options, for example one could use Spinboxes instead of LineEdits, etc... Have a look at what is available, explore...you will surely have other ideas.

That's about all we need to do in Qt Designer. One last thing, though, let's rename all our elements with simpler names, so it will be easier to identify them in our scripts: 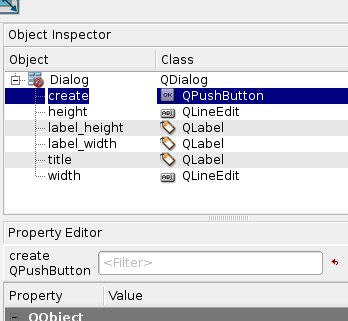 Converting our dialog to python

Now, let's save our widget somewhere. It will be saved as an .ui file, that we will easily convert to python script with pyuic. On windows, the pyuic program is bundled with pyqt (to be verified), on linux you probably will need to install it separately from your package manager (on debian-based systems, it is part of the pyqt4-dev-tools package). To do the conversion, you'll need to open a terminal window (or a command prompt window on windows), navigate to where you saved your .ui file, and issue:

In Windows pyuic.py is located in "C:\Python27\Lib\site-packages\PyQt4\uic\pyuic.py" For conversion create a batch file called "compQt4.bat:

In the DOS console type without extension

In macOS, you can retrieve the appropriate version (the same that is used internally in FreeCAD 0.19) of QT and Pyside with these commands (pip required)

This will install uic in the folder "/Library/Frameworks/Python.framework/Versions/3.7/lib/python3.7/site-packages/PySide2/uic", and Designer in "/Library/Frameworks/Python.framework/Versions/3.7/lib/python3.7/site-packages/PySide2/Designer.app". For convenience you can create a link of uic in /usr/local/bin to be able to call it simply with uic -g python ... instead of typing the whole path of the program, and a link to Designer to retrieve it in the mac's Applications folder with

Into Linux : to do

Since FreeCAD progressively moved away from PyQt after version 0.13, in favour of PySide (Choose your PySide install building PySide), to make the file based on PySide now you have to use:

In the DOS console type without extension

Into Linux : to do

On some systems the program is called pyuic4 instead of pyuic. This will simply convert the .ui file into a python script. If we open the mywidget.py file, its contents is very easy to understand:

As you see it has a very simple structure: a class named Ui_Dialog is created, that stores the interface elements of our widget. That class has two methods, one for setting up the widget, and one for translating its contents, which is part of the general Qt mechanism for translating interface elements. The setup method simply creates, one by one, the widgets as we defined them in Qt Designer, and sets their options as we decided earlier. Then, the whole interface gets translated, and finally, the slots get connected (we'll talk about that later).

We can now create a new widget and use this class to create its interface. We can already see our widget in action, by putting our mywidget.py file in a place where FreeCAD will find it (in the FreeCAD bin directory, or in any of the Mod subdirectories), and, in the FreeCAD python interpreter, issue:

And our dialog will appear! Note that our Python interpreter is still working, we have a non-modal dialog. So, to close it, we can (apart from clicking its close icon, of course) issue:

Making our dialog do something

Now that we can show and hide our dialog, we just need to add one last part: To make it do something! If you play a bit with Qt designer, you'll quickly discover a whole section called "signals and slots". Basically, it works like this: elements on your widgets (in Qt terminology, those elements are themselves widgets) can send signals. Those signals differ according to the widget type. For example, a button can send a signal when it is pressed and when it is released. Those signals can be connected to slots, which can be special functionality of other widgets (for example a dialog has a "close" slot to which you can connect the signal from a close button), or can be custom functions. The PyQt Reference Documentation lists all the qt widgets, what they can do, what signals they can send, etc...

What we will do here, is to create a new function that will create a plane based on height and width, and to connect that function to the pressed signal emitted by our "Create!" button. So, let's begin with importing our FreeCAD modules, by putting the following line at the top of the script, where we already import QtCore and QtGui:

Then, let's add a new function to our Ui_Dialog class:

Then, we need to inform Qt to connect the button to the function, by placing the following line just before QtCore.QMetaObject.connectSlotsByName(Dialog):

This, as you see, connects the pressed() signal of our create object (the "Create!" button), to a slot named createPlane, which we just defined. That's it! Now, as a final touch, we can add a little function to create the dialog, it will be easier to call. Outside the Ui_Dialog class, let's add this code:

(Python reminder: the __init__ method of a class is automatically executed whenever a new object is created!) Then, from FreeCAD, we only need to do:

That's all Folks... Now you can try all kinds of things, like for example inserting your widget in the FreeCAD interface (see the Code snippets page), or making much more advanced custom tools, by using other elements on your widget.

This is the complete script, for reference: